Passionate about music and meeting people, our guest speaker began his musical career in Bangalore playing bass in church and a stint on the drums in his first band. Naveeen Thomas discovered his true calling was to the strings and the rest has been a musical journey of learning and expression.

With over 20 years of experience playing music, Naveen also enjoys spending his time travelling, playing and watching sports and enjoying cuisines from across the globe. 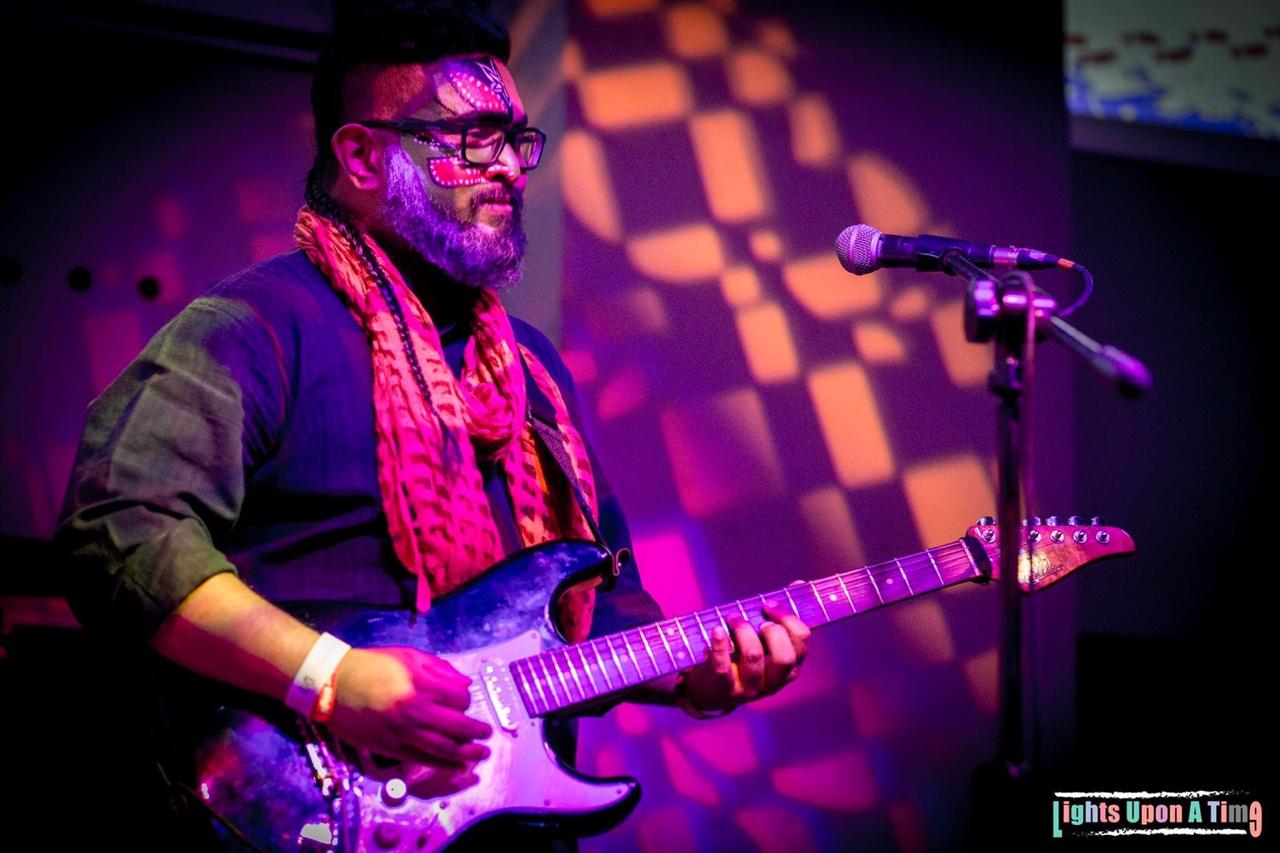 Naveen likes to believe that his entire journey has been an amalgamation of music, marketing and media and his efforts to marry them all together. Admitting to not being a very natural musician and marketing professional, it was his passion and keen interest for both fields that compelled him to pursue it to the best of his abilities.

As someone who comes from a family where music forms a big part of their lives, Naveen has always enjoyed it and believes that it is the purest form of conveying an emotion without words and is for him a means to express his emotiveness.

When he was rejected from the college he wished to attend right after his 12th, Naveen found himself disheartened and doubting his capabilities. While it was one of his hardest years, it also proved to be one of his best. Giving him the chance to pick up the guitar and spend hours strumming tunes and creating music, kept Naveen going, helping him identify his true calling and passion for the art.

Not long after getting accepted at MCC Madras, Naveen became one of the first ever freshers to be a part of the college band during his first year of college, an experience that he holds very dear even today. He enjoyed his time at MCC, where along with learning he also engaged in several extra curricular activities, performed at fests and travelled with the band.

“Things happen when you put your head down and keep working,” and Naveen has been doing just that since his days at college, where his journey in the space of music took off and also introduced him to the idea of event management and his love for working with a team and creating something he was proud of that till today continues to inspire him. While he was keen on following a career in music, he decided to sit for an interview just as an experience and much to his pleasant surprise, got selected.

However, since he was very keen on following a more creative and experiential field as a career, through a referral was able to land a job in an event management company and learnt a great deal in the process. He went on to do a course in event management where he met some incredible people who he continues to remain in touch with. Naveen was very grateful for all these opportunities as it not only allowed him to learn a new skill but also encouraged him to work on his music as well.

Naveen goes on to tell us about his many work projects and name some incredible organisations where he got the chance to be a part of some of the biggest projects, creating amazing content and shouldering huge responsibilities.

He has over the years been a part of companies including, Zeroin, an event management company, Rave Magazine, an Indian music magazine first published in 2001, the radio station, Indigo, where he was a part of the launch team and did about 25 events per week and had lots of tie ups.

While he enjoyed every second of it, he did not fail to acknowledge the hard work and perseverance that went into it. Naveen then went on to work with Levi’s, helping them with interesting marketing campaigns and other marketing content. All the while juggling his music, Naveen then joined a band and did quite a few shows and grew tremendously as a musician.

Unfortunately it wasn’t that simple, and eventually he began feeling the stress of it all. Spending months away from family and friends, constant travel and balancing his work and music did not come without a cost. Thankfully for him, seeing as how music became an outlet for him to feel at ease and unwind, he managed to continue doing what he enjoyed and exceptionally so as well.

Posing an important question, Naveen talks about the various decisions we need to continually make as adults and the impact of changing priorities and about how it comes down to us deciding which ones serve our best interest. At one point, while he was doing remarkably well at Levi’s, he realised that work had begun to feel like work and soon his decision to pursue music took the front seat.

While giving up something incredible to do something uncertain was not an easy decision, Naveen was confident in his choice having given it careful thought and consideration. Eventually, he began doing a lot of work with music, handling events for friends and growing his network while getting the opportunity to work on a number of music related projects.

Doing close to 20 events over 5 days including working with several international artists, Naveen soon realised the power of working with a team you trust. He was able to delegate work among the team and maintain a clear chain of command.

As he grew in the industry, Naveen realised that things were changing and he learnt to deal with it, all the while learning and working with people whom he admired and was inspired by.

He has worked on regional music and has enjoyed his time working with different people and projects, travelling the world and performing at some of the most beautiful locations giving him the opportunity to witness changing global culture as well.

Naveen got married earlier this year and is planning to move to the UK to be with his wife and begin a new chapter in his life. While he is aware of its impact on his work and commitments, he is prepared to take it all in stride, confident in his knowledge that his passion, dedication and commitment remains the same, if not having grown stronger over the years.

New Age Perspective On The Life Of A Musician

Coming from a family that instilled in him a sound value system, Naveen has always led life as per his desire to add value to anything that he does. So while he is aware of the distractions the industry is filled with, he is also aware of his role and commitments. Having learnt very early on in life that music is a part of him and not the other way around, he has managed to keep his head on his shoulders and work hard at every opportunity. The key to being comfortable and enjoying what you do is to him the ability to realize what you want to do and not get caught up with what someone else is doing.

Time spent in the lockdown

Jesting about his busy schedule, spending his time doing nothing, Naveen was affected in more ways than one like every one of us with the wake of the pandemic. Having spent his whole career constantly travelling and on-the-go, Naveen was disappointed when shows and events that he had invested a lot of time and effort into had to be cancelled in March.

He has however been using his time teaching music and learning and growing his knowledge in the space as well. A strong believer in helping others to be better than himself, Naveen thoroughly enjoys teaching others as he sees it as an opportunity to learn better himself.

Naveen has been learning to record music over the months and has managed to make things work given the technical constraints working from home poses. He has also done a number of Instagram Lives and has been keeping busy honing his creative side. He has also been using this time to be with family and make the most of his time in India before leaving for the UK.

Naveen has been working on creating new music and learning to cook up quite a storm in the kitchen during his free time. Practicing the guitar and teaching himself new and relevant skills and competencies is what is keeping Naveen busy these days.

2021 And His Plans For The Year
A brand new start, Naveen feels both excited and nervous for what the new year is to bring. Moving to a new country and starting from the beginning while a daunting prospect, he is also hopeful about the numerous opportunities it will open up for him. “Some of the best stories are written in a time when there are great adversities” and it is with this resolution that he is looking to kick-start an exciting new chapter in his life. Sometimes, all you need is a challenging start to begin something incredible while at the same time inspiring and being a strong positive influence.

“The people who really achieve something in life are not the most talented but are the ones who simply forgot to give up. Working through adversity, focusing and working hard is what will eventually determine your success or failure and while there are many who will drop out when it gets hard, it is in perseverance and constant learning that we make it in the world.”

A wholesome and inspiring session with none other than Naveen Thomas and we were all left in high spirits and a positive mindset. His knowledge and passion for everything that he does is truly inspiring and we look forward to seeing what else he gets up to in the future. Wishing him the very best of luck and every success.

Head on over to our Instagram Page to watch the recording.