An Interview with Parabjeet Singh 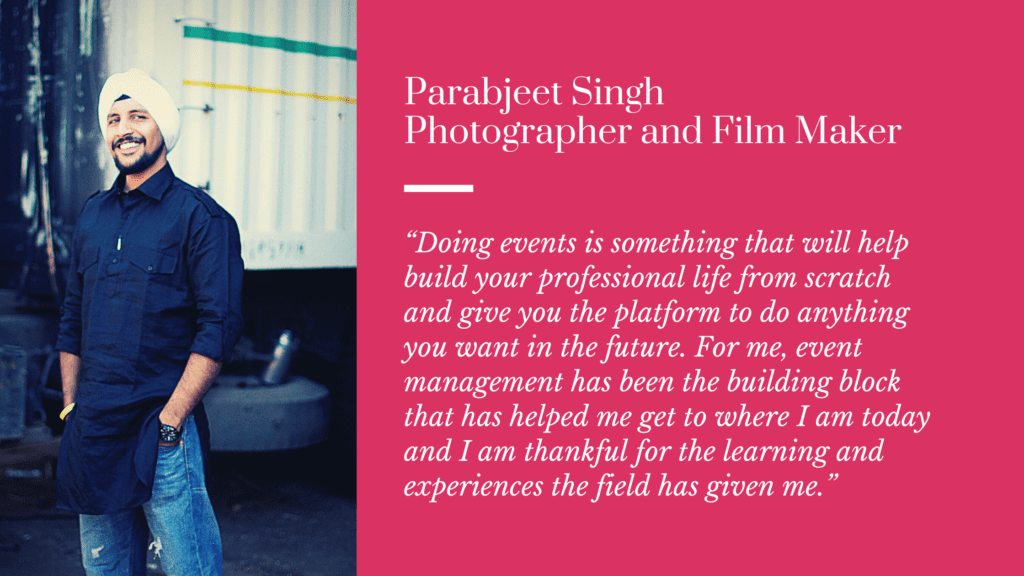 In his own words, our next guest speaker is someone who is quirky, creative and obsessed with the finer details of creating unforgettable memories and experiences through his work.

Parabjeet Singh is a part-time musician / film-maker / photographer and full-time foodie. Sitting out on his balcony with a cup of Masala Chai, chips and a dose of heavy metal in the background, is arguably the best way for him to start his day.

Having played in a professional band, performing live gives him a great rush and he enjoys creating beats and playing the Cajon. Parabjeet is today a full time photographer for 3 years now, while being associated with the film space for over 5 years now.

The Project head for ‘Brahman Naman’ India’s first Netflix entry, he has been a part of several projects that have been acclaimed globally.

Speaking to us all the way from Australia, Parabjeet shares with us what he had hoped to have done in 2020 and as a result of the pandemic, what he is currently doing.

2020 was supposed to be a travelling year for which he had planned and saved up for by doing weddings and other gigs in order to fund this venture of his.

When the pandemic struck, Parabjeet was in Australia and needed to join university in order to continue his stay in the country on a student visa.

He began studying film making and is today working with a photography company back in Perth and waiting to come back home as soon as possible.

Dating back to how he began his long and versatile career, trying his hand in several ventures that piqued his interest, Parabjeet was studying photography back in his college days and joined the event space simply because he thought it was ‘cool.’

Since then, it has been a roller coaster ride with him getting the opportunity to explore various avenues all thanks to his time spent studying and mastering the art of event management. Working his way up the events ladder, Parabjeet built his connections and got the opportunity to work with some of the biggest events in the country including a show with Brian Adams and the Black Eyed Peas to name a few.

Even today, he is grateful for his understanding of the events space for it has created a platform for him to understand everything he is invested in today.

From understanding production value to his time spent working with PR and the journalism sector, event management helped set his foundation the right way. Parabjeet has even done several voice overs and has been involved in dancing alongside being active in a musical band as well.

He has also been a part of an advertising stint for a good 3 years where he learnt much about the art of practising and perfecting the skills of patience and better communication.

Parabjeet even went on to do films for 2 yrs and learned a lot during this time and eventually decided to direct his first film, ‘Fault.’ His work on Fault won him several awards, enabling him to travel and involve himself more in this space.

His journey as a photographer began when he was asked to film a friend’s engagement ceremony and since then there has been no looking back. The opportunity to connect with people and through the help of a camera, capture moments and experiences has been something he truly enjoys and finds satisfaction in doing.

His Take On Stand Up Comedy

Jovial and humorous, with an ability to get along with just about anyone, Parabjeet has more often than once been advised to try his hand at stand-up comedy.

While he has considered it, it still seems daunting in terms of having to remember long scripts and address a large audience while at it and so he prefers to stick to what he knows best and is confident in executing to the best of his abilities.

Passion is what drove and continues to drive Parabjeet to undertake his quest in trying to do as much as he can from advertising to making films and today working in the space of photography.

Having never chased anything with an agenda, it was purely based on his interest and keen sense of learning more about that particular field that motivated him to do some of his best work till date.
From the smallest to the biggest career choices he has made, Parabjeet is confident in his ability to figure things out in a manner that will work towards adding the most value to anything that he undertakes.

His Time Spent During The Pandemic

Apart from attending university, Parabjeet has been spending his time in Australia doing as much as he can to make the most of his time there.

Having come across a photography job through an online advertisement, he got in touch with the recruiter and then soon after saw himself attending his first ever interview of his entire career.

Today, living in Perth, he works with a school photography company doing yearbooks, proms and other photography content. While the work and time schedules may be hectic, Parabjeet still finds the time to keep his creative side alive by engaging in several self initiated projects as well.

Since the pandemic started, Parabjeet has been spending his time in Australia and so in the coming few months he hopes to return to India and reconnect with his family and friends.

Looking forward to returning, he is also afraid of settling into the new dynamic and much changed market scenario that the pandemic has left in its wake and hopes to be able to pick up from where he left off.

Moving on to speak about how the pandemic has affected us not only economically but also mentally, he is prepared to take everything in stride and hopes for the best in the coming year.

“Doing events is something that will help build your professional life from scratch and give you the platform to do anything you want in the future. For me, event management has been the building block that has helped me get to where I am today and I am thankful for the learning and experiences the field has given me.”

Having Parabjeet join us for this session has been nothing short of spectacular and we enjoyed every moment of hearing his story and experiences over the years. Here’s extending our thanks and wishing him the very best of luck for all that he sets out to accomplish.

In case you missed out on the live session, head on over to our Instagram page to watch the recording.