An Interview with Rahul Thakurta from rtfactss 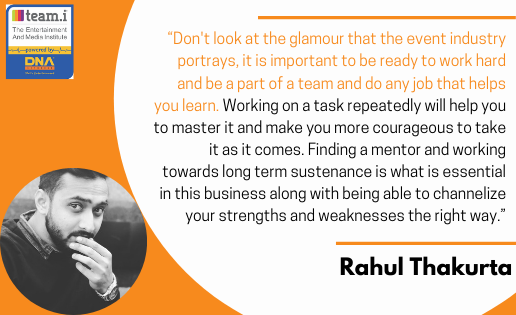 The jack of all trades, a risk taker and a charismatic salesperson, Rahul Thakurta has been in the industry for 6 years now along with 7 years of experience as an MC. A professional whose hunger for continuous learning and reputation as an influencer has been inspirational to many budding event professionals, he is today the Chief at ‘rtfactss’ as well as the creator of a  Travel Vlog Channel – ‘awaarahul’

Indulging in sports, watching movies, going on solo rides, reading fiction novels, and meeting new people are where his interests lie outside of work.

His role has been monumental in various events that have taken place over the past across the world and include Procuring F22 Quarter scale Model for IGate at Oracle Open World in 2014, the HPE C4IO Summit 2018 (Event for C Level Executives from the top brands), and the Google Pixel 2 & Pixel 2XL Launch in 2017.

As a Bengali born and raised in Bangalore, Rahul is a multilingual, whose love for learning and a never-give-up attitude has opened up a plethora of opportunities for him over the years. Events came to him naturally and in 2007 he was introduced to the space of events production by his father where he got the opportunity to interact and learn from some of the most experienced and reputed professionals at the time.

Since then, there has been no looking back and the one and a half years spent as an events promoter has been monumental in his journey as an event professional. Over the years, he has worked in the areas of activations, grown as an emcee and did his very first gig at Garuda Mall in Bangalore.

Soon after his first emcee stint, Rahul was taken under the wing of RJ Vicky who taught him the nuances of being a commercial emcee and so began his journey with promotions and road shows where he did mostly kannada shows on radio stations including Big FM, Fever FM and Red FM. Professionally, he has grown significantly over the years and went on to do several corporate shows as well and is proud of how far he has come and grateful for all the opportunities made possible by team.i.

His time at team.i, gave him the opportunity to not only learn a whole new side to the industry but also taught him important life skills including negotiating skills, efficient communication and having a strong stage presence.

As someone who had tried his hand in several ventures, Rahul was yet to find his true calling before he met Mr. Girish who took him under his wing and mentored and guided him to be the professional he is today.

The kind of opportunities and learning this guidance has given him is something Rahul is truly appreciative and grateful for. Being pushed him to do better and be the best at what he does, Rahul has over the years been working and travelling extensively along with working as a professional emcee.

Today, he has taken over the family business and introduced a newer and innovative approach to running the operations. While it took him a great deal of acceptance to get back, Rahul is happy with his decision and has even begun his own line of visionary merchandise called ‘rtfactss’.

While his time as an event professional may have come to an end, the learning and experiences that it has taught him has helped him establish his business today.

Rahul is not hesitant to acknowledge the difficulties faced in the last few months as a result of the pandemic, what with event companies losing clients and money being stuck in the market, it has surely been a devastating loss across the industry. However, Rahul has managed to see the silver lining in these difficult times and has put his knowledge of branding and procurement to good use.

While travelling has always been his passion, Rahul believes that this is the year to find one’s footing and focus on long term sustainability before branching out to take on riskier ventures.

Since beginning to take over the business, he has brought in fresh new perspectives and met with suppliers along with offering clients some of the best deals and promising superior quality products.

He is thankful for his education and experiences that have given him the edge over most of his peers and the breakthrough to establish himself as a budding entrepreneur who believes that quality education along with the right skill sets is what is important.

The name rtfactss came to him during his time at team.i and deals with providing solutions and customising vision based merchandise. Still in its initial days, rtfactss is still in its growing stages and exploring the vast scope the industry provides.

‘Awaarahul’ is a budget travelling vlog having a bollywood touch to it. Rahul is looking forward to working with other travel vloggers along with the tourism industry in the near future to create travel and entertainment content that will be well appreciated by the masses.

The year 2021 Rahul believes is the year to stabilize and work on getting back on his feet post the pandemic. Setting targets and achieving turnovers and working hard and making up for lost time and money is what he plans on getting into in the months to come.

While he may have achieved 5% of his target already, Rahul is proud to say that he is a shameless salesman who is willing to give his 100% to reach his goals and doing it with pride.

“Don’t look at the glamour that the event industry portrays, it is important to be ready to work hard and be a part of a team and do any job that helps you learn. Working on a task repeatedly will help you to master it and make you more courageous to take it like it comes.

Finding a mentor and working towards long term sustenance is what is essential in this business along with being able to channelise your strengths and weaknesses the right way.”

It was indeed an absolute pleasure speaking with Rahul Thakurta and we wish him the very best in all that he does and every success in the years to come.

In case you missed out on attending the live session, you can watch the recording linked here. Please do head on over to our Instagram page to follow the rest of the sessions as well.