An Interview with Satya Prakash from ‘Voice of Bangalore’ 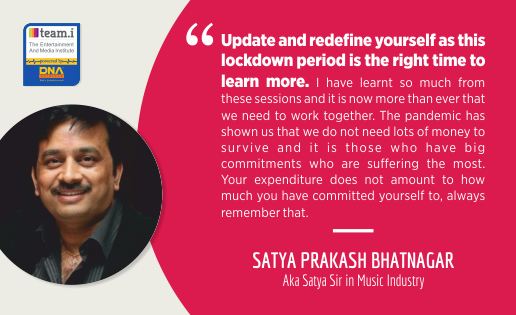 Not one to be held back by adversities and the hardships that he was faced with, our next guest speaker has proven time and again that with passion and commitment being the driving force, there is nothing that can stop you from chasing your dreams.

Satya Prakash Bhatnagar fondly known as Satya Sir in the Music Industry discovered his love for singing back when he was a student and won several music competitions in school. He began singing professionally in the year 2001 and later went on to become a Judge and Mentor on several music shows.

Getting to Know our Speaker

Having begun his singing journey back in 2001, it was only in 2004 that Satya landed his first paid singing show in Hyderabad before starting the ‘Voice of Bangalore’ in 2005.

Satya recalls the initial hardships that he faced when met with rejection from several telephone companies who were seemingly not ready for the innovative step he was looking to take.

Satya is someone who believes in learning from those who know the nuances of the trade and is not hesitant to reach out to his peers when needed. He is incredibly grateful to have met Arvind through whom he learnt the intricacies of handling a business, from making presentations and proposals to putting forward a business idea.

In 2006, Satya found himself ready to launch his venture and invested himself completely to start one of the biggest offline talent shows in the country.

More about his Work and Projects

Satya comes from a background of a well established family jewelry business and while he initially had set out to continue taking over the business, he later decided to pursue his passion for music and moved to Bangalore. As a result of a series of health complications, Satya was under strong medications which led him to slowly lose his memory. This however, did not stop him and he turned to music as a form of therapy.

What started out as a means of self improvement eventually turned into a professional venture where he was among the first few to incorporate karaoke with Wave along with customizable backgrounds and videos.

His hunger and drive to learn more led him to work with some of the bigger corporates in the country today and has enabled him to provide a platform to guide and mentor ambitious and passionate singers.

His Journey with Music

We went on to discuss the impact of music in his recovery and its influence on affecting our moods. To Satya, music has always been more than waves and vibrations, it is a force that can bring joy to those producing it as well as to those listening to it.

More about Voice of Bangalore

Starting out in Garuda Mall in Bangalore, the Voice of Bangalore was focused on encouraging passionate singers to audition in order to recognize their strengths and weaknesses. At the time when his career was at its peak, Satya dedicated his life to VOB in order to create an impact and help singers identify their true potential.

Satya goes on to share fond memories of his initial days as a singer and how his experiences have led him to where he is now. Today, he is proud to have mentored and taught singers and playback musicians and is appreciative of the recognition and respect he has received in turn.

His Sources of Revenue

While his main source of income comes from staging various music shows across the country, Satya is also responsible for conducting the longest running karaoke in RSI for 11+ years.

The Impact of the Pandemic on his Business

Like everyone else in the industry, Satya faced several shortcomings since the pandemic hit the country back in the month of March. He has however conducted a few shows, a wedding and a few corporate events in the last few months.

We then went on to discuss the negative impact of free singing and how its benefits are not reaped by those who deserve it the most. It is all about ensuring that the online experience is worth the time and energy that is invested in the making of such platforms, is what he has to say about it.

Satya has begun a new series online where he discusses the nuances of how to make the best use of the resources available to singers today without having to invest in expensive equipment.

“Update and redefine yourself as this lockdown period is the right time to learn more. I have learnt so much from these sessions and it is now more than ever that we need to work together. The pandemic has shown us that we do not need lots of money to survive and it is those who have big commitments who are suffering the most. Your expenditure does not amount to how much you have committed yourself to, always remember that.”