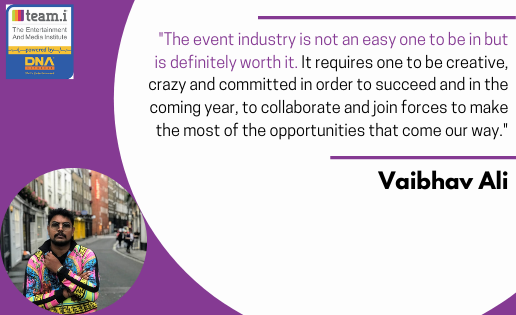 A professional master of ceremonies since 2006, our next guest speaker has worked with some of the biggest names in the industry to put together events that are even today used as benchmarks for other events.

From hosting the Airtel Delhi Marathon with SRK, the Mumbai Marathon and many more exciting events including the SX4 at Garuda Mall for 4 days and 4 nights, Vaibhav Ali is one of the proud holders of the Limca Book of records as well.

Having hosted a number of events that have been adventurous and unique in its execution , Vaibhav has hosted an event while bungee jumping, hosted the World Cup finals at the Trafalgar Square London 2019, hosted the first ever diabetes fashion show with Prasad Bidapa, and the launch of the Nissan in India with the presence of its global MD.

Bursting with stories of gratitude, Vaibhav Ali likes to believe that he was lucky to be given the opportunity to address an audience and have them enjoy his performance that led to him being the successful event professional he is today.

Back in 2005, Vaibhav was working at a call centre and doing rather well for himself as a budding 18 year old excited to be earning his own money. However, a lack of job satisfaction led him to explore more creative and experiential career options. Not long after, he met a college buddy who was in the event industry and introduced him to some projects where he got a chance to learn more about the industry.

While working an event in Forum mall at one point of time, he came across an emcee performing on stage and was mesmerised by the energy and vibe he emitted. Thus began his love for emceeing and was soon, after much persistence, resilience and convincing given an opportunity to host an event that turned out to be an incredible success. Since then, he has not looked back to this day and is immensely grateful for all the opportunities it has opened up for him.

From working with some of the biggest stars in the industry to traveling the world and hosting luxurious events, Vaibhav has proved time and again his place in the industry today inspire of the challenges that he faced as a result of having a stammering problem as a child. Over the years, he has worked very hard to incorporate new and exciting aspects to his events that have grown to be some of his biggest USP’s till date.

More About His Creative Experiences

Vaibhav goes on to speak about his time hosting some of his most memorable events including the bungee jumping stint that he did a few years ago. Having to promote a brand while bungee jumping is not something that we expect to be a common marketing stint and that is what makes Vaibhav’s works as good as it is. His fearless ability to take on challenging and reckless opportunities have given him the chance to be one of the most versatile and sought after emcees of this generation.

His time hosting an event with none other than Mr. Shah Rukh Khan is something that till date continues to be a surreal and holy experience. From getting to interact with him and share the stage while hosting over 1000 attendees is something that he reminisces even today.

Challenged to execute something extraordinary within a limited budget pushed Vaibhav to enter into the Limca Book of records for having the longest ramp on a stage. While these are just a few incidents of his extraordinary work, Vaibhav has been an inspiration to budding event professionals to challenge the limitations of the industry.

Corporates being his choice of event preference, Vaibhav prefers the professional and systematic approach that it requires. From following a well structured plan to being challenged to instil a sense of relaxation and ease among the employees while they least expect it, Vaibhav enjoys hosting corporate events that make up for close to 70% of his work as an event emcee.

His Time In Lockdown

What made this session with Vaibhav all that more inspiring and heartfelt was his ability to speak openly and discuss matters that most find difficult to address. From discussing the financial struggles since the pandemic began to him appreciating his wife and expressing his gratefulness and love for her and his family, Vaibhav managed to strike a cord with everyone who tuned in to listen.

As someone who has always been good at adapting to challenging situations, Vaibhav began conducting live trivia quizzes on social media that eventually led him to bag several corporate events during the pandemic. He goes on to tell us about the change in energy that needs to be made while hosting an event online as compared to an on-ground event.

He is also very excited to begin work with one of the top VC’s of the country, helping him create content for his book by interacting with some of the biggest personalities of this age.

Vaibhav’s advice and game plan for the coming year is to be careful with expenses, be adaptive and to be on a strict budget. No work is less important and so it is necessary to reach out and do your best to stay afloat during these difficult times.

He believes that if we can manage to make a conscious effort to be more careful with our finances, we should be able to come out of this very soon.

The event industry is not an easy one to be in but is definitely worth it. It requires one to be creative, crazy and committed in order to succeed and in the coming year, to collaborate and join forces to make the most of the opportunities that come our way.

A humbling and inspirational session, it was a joy to hear Vaibhav Ali share his story and experiences with us. We wish him the best of luck and every success in all his future endeavors.

In case you missed out on attending the live session, do check out the recording linked here or head on over to our Instagram Page to follow the series.