Interview with Arun Samuels, Chairman and Director of WINGS Group of Companies 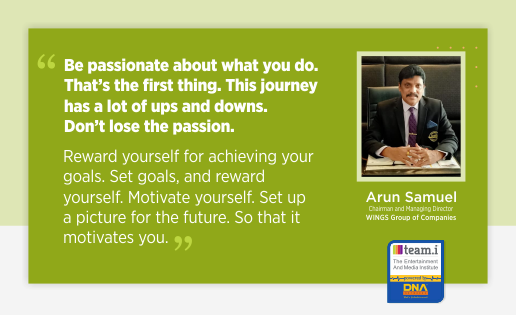 Experts Speak on the Changing Landscape… A plethora of opportunities is our live Instagram series where we invite the experts of the events industry to talk about the sudden impact of covid on the event industry. In this series our primary focus is to address the key concerns and queries of students, people and other event managers about the future of the events industry and the shift to virtual events.

On a 6pm Tuesday, 21’st of July 2020, we had Mr. Arun Samuels, Chairman and director of WINGS group of companies, join in with our CEO Mr. Arvind Jyot Sabhaney to talk about his illustrious journey from a door to door salesman to an owner of 891cr turnover company and much more!

Mr. Arun’s journey has been nothing short of an exciting movie plot. “I never ever thought I would be here where I am today when I started!”. A Bangalorean, he did his schooling from St. Johns. His father, being an engineer himself, wanted his son to be either an engineer or a doctor. In pursuit of that, he joined Christ University.

His first year at college came with a lot of freedom, hence he got attracted by the bad company among his friends, and sadly the result was him being rusticated from his college in his very first year.

“There was a lot of pressure at home. My dad was an engineer and a well respected man, and here I was being thrown out of a college and right now sitting at home and doing nothing”. He calls this period of his life one of the darkest moments.

Then for temporary purpose, he joined a radio officer course in pursuit of marine engineering. Yet, that seemed quite banal for him after sometime, and thus he quit from there too.

Then one day his future ex partner came to his area in Cox town in search of few promoters. He, along with 15 others, joined the bandwagon. His first job was to stand in front of the MG Road holding the product and promoting it from shop to shop.

Out of the 15, many left. Then his job role became from shop to shop sales, to door to door sales. This is when out of the 15, he was the only one who stuck to the job.

During the door to door sales job, he realized the power of the middle class. His products were bought by middle class people more than the higher rich class.

His life changing moment came when one day he went to sell a washing powder for free. It was afternoon time, and an irritated old man answered the door. Mr. Arun told him about the offer, but the old man was so irritated that he took the washing powder and threw it on his face.

A dejected Mr. Arun went to a nearby park, and broke down because of this incident. He had two options then, to quit the job and go stay with his friend, or go back and continue with the job.

He decided the latter at that moment, and since then he had a hunger and desire to finish on top. He used to ask his boss how to get himself promoted, and he would work hard every now on then and get promoted.

Then in 1993, he became a business partner for a company called Arrow promoters. They made a lot of money, until both of them and his partner suddenly started having differences of opinion. That’s when he decided to quit this job, and started his own company: WINGS.

Mr. Harish Biju was his first client, and he had to promote a cold coffee product. With a team of 3 people, all of them from an ordinary and humble background, went on this journey. Ever since then, they haven’t looked back.

When asked about the real success for WINGS, he says “WINGS is built by ordinary people doing extraordinary things.” And that’s been the mantra of Mr. Arun and his company.

They hired ordinary people who wanted a second chance in their life. He bestowed his hope and belief on them. Made them leaders of tomorrow and the fruit is being borne now.

Truly, his journey is nothing short of an amazing and inspirational movie plot.

What have you been doing during the lockdown?

“I had never dreamt of a situation like this- where we won’t be able to work or pay people”.

As soon as the lockdown was announced, Mr. Arun had a meeting with his team, and told them that they have to be ready for the next 3 months.

But even though the lockdown has been extended and the situation doesn’t look like it will settle down in another few months, yet WINGS have already started working on various things during this lockdown period.

Firstly, they all started reinventing themselves and the company. To understand where they could improve in terms of strength and team building.

Secondly, they started various projects. They made welcome kits to be distributed across corporates.

They then picked up their media team, and are producing movies that are launching on amazon, hotstar and Netflix. That’s not where the list stops.

Their Chennai office assembled a covid team that would go and sanitize shops and corporate offices as part of CSR. Then they have assembled another team across India that delivers new books from different school across India to the kids

“We are either gonna be victims, or victors of covid. Lets be a victor” that’s what Mr. Arun keeps telling his team time and again now to motivate them.

What do you think about the event’s future?

“The way people went to buy liquor when shops opened up, it gave me hope!” chuckles Mr. Arun. He then further continues “We will get back. It might take some time, and be a little different for a while. When corporates reinvent, we will reinvent.”

A word of Advice to the students and youngsters

“Be passionate about what you do. That’s the first thing. This journey has a lot of ups and downs. Don’t lose the passion.

Reward yourself for achieving your goals. Set goals, and reward yourself. Motivate yourself. Set up a picture for the future. So that it motivates you.”

Head over to our instagram page to watch the full interview.