On-ground vs Virtual Events and Opportunities for the Future: In Conversations with Sarita Raghuvanshi, celebrity and renowned MC and Image Consultant. 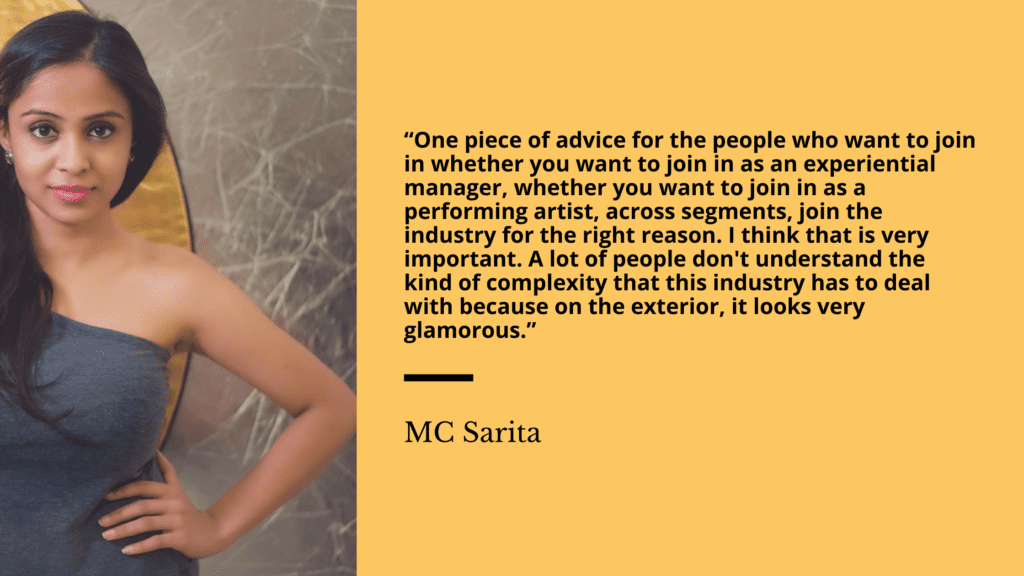 The guest expert for our second session of on-ground vs virtual events and opportunities for the future  was Sarita Raghuvanshi. She spoke about her career, the world of events and stage performance and much more with our team.i CEO Mr. Arvind Jyot Sabhaney, on a quite rainy evening of a Tuesday at 6pm on May 26th.

A celebrity figure, she is a prolific speaker, a renowned MC and a thriving image consultant. She has hosted events for the United Nations and several other government bodies and world organisations.

The ongoing pandemic has got some really bad news for most industries and for people involved in these industries. One such industry where the pandemic has affected a lot is the events and the event management industry.

“On-ground vs virtual events and opportunities for the future” was our first live insta series where we invited 10 guest experts from the events industry on 10 different sessions to talk about the situation of events right now during pandemic and the future of it especially after the inception of the concept of virtual events.

We at team.i wish to send out the message that the event industry still remains to be one of the biggest industries in the country even in the face of the pandemic through all our series of sessions on various topics.

Tell us a little bit about yourself about why you wanted to become an MC and  what has been the journey so far?

For Sarita, her career as an MC started off in 2013 “ I started with activations and my first activation was for Samsung, which was being spearheaded by CS direct then. And then I was employed by a man power agency which is called watermark, which is based in Bangalore.”

This was an accidental pursuit, as she had no idea the field of stage performance was going to be her career in near future. “I got into MCing accidentally because I am an engineer by qualification.

And I’d also joined a very reputed Institute for my masters in business administration. And in the middle of that, I realized that this is not where my heart is, and I just wanted to do something else. So I just quit my course in between. I came back and this was quite a hasty decision.”

It wasn’t all rosy from the start for Sarita when she decided to quit her master course in between.

She recalls how she had to financially depend on herself because she had to prove it to her family members that she’s pretty dedicated towards her passion which is stage performance.

Then one fine day she gets a call for an audition for Samsung activation, which she gets through. She recalls that the pay scale for her first MC job was really good back then, and this gave her confidence to further think about this field more seriously.

While at Samsung, she did a bunch of activations across different malls of Bangalore. Her next activation was for Intel, which was in tie up with Pulse Strategy, for the well known campaign “My Discoveries”.

After working for Pulse Strategy for a while, she realised that she’s confident to pursue her career in this field seriously. “And then I figured, okay, that this is an area of interest for me. I like being on stage. I’m quite the performer. And I do enjoy the limelight that follows when you’re on stage. So I decided to take it a notch up, stopped activations completely, and decided to take the plunge and do events.”

For her first step in the big world of events, it was an ad agency called Showbiz that showed faith towards her and her exponentially growing talent. Her first big event as part of the agency was for the press launch of Jennie Cabs.

So what have you been doing this lockdown period?

According to Sarita, this period of lockdown in all honesty has been a blessing in disguise for her. She says she now has time to pursue things that she couldn’t  do during pre-pandemic because of her busy schedule.

“I have finished two certifications so far. One of them is from Harvard, which is on Hinduism through its scriptures. And the second one is ethical leadership, which is from Burlington university. And then I also started preparing for my PhD.”

She also has taken time out during this lockdown period to focus and understand how technology is going to aid in her career and how it is going to progress her career further.

What about events sarita? Have you been doing online events, virtual events?

Sarita’s last on ground event was on 14th March of this year 2020. Since then for the next 35, 40 days there was no work whatsoever. And then suddenly with the rise of webinars, she found herself MCing a couple of webinars, followed by 5 other events which were a combination of R and R and family days.

Interestingly, you spoke about a family day and, R and R event. Could you expand on that?

For Sarita, her objectives while MCing for the family day virtually were to motivate, engage and entertain every family member and to make them believe that their performance matters.

This objective really mattered to her because of the tense and negative atmosphere that has engulfed everyone’s life these days.

She says related to this “So when we are doing these events, the whole agenda was to make sure that people feel that the work is going to be there and that their performance matters and that they will have to overcome the mental block that has been created by their own brain, their own head. Right.

There’s so much news that we are consuming that says that things are going down here and everybody’s suffering. So the whole idea was to entertain, to engage and to keep the spirits high”.

Sarita and her organisers made sure they planned various things and activities especially engaging ones such as interaction with the family members etc.

She admitted that many family members felt quite connected and comfortable since they were able to connect everyone and see everyone from the comfort of their home, which is otherwise difficult due to logistical purposes.

With respect to R and R she says “ we just let the employees know that they can work and they can succeed no matter how terrible the situation is, because if they can do it in a pandemic, they can most definitely do it otherwise.”

Do you think that virtual events will stay after the pandemic goes away?

“I definitely think that they will stay” says Sarita as she believes Online events have made a huge mark and big companies have invested and come up with different innovative ideas and ways to make these experiences more engaging and different.

But also she believes that in near future we would get to see a healthy combination between on ground events and online events. This is because according to her “there is nothing that can replace human contact or the warmth of 1000 people together in a hall cheering.”

So what is your take on the hybrid events? How does this work?

According to Sarita, the concept of  virtual events isn’t a new one. It’s been there for a very long time. Video Calling technology has been an integral part of the events industry in terms of conducting conferences, meetings or even client hosting.

“Technology has always been an integral part of events. And it is definitely going to be a very healthy mix of what we see. The modus operandi might change in the future, but both of them cannot replace each other. Both of them have their own place and they are here to stay and they will work beautifully hand in hand like the wheels of a car.

So in your opinion, what is the best case situation? When do you think things will come back to what we call normal?

“Okay. So I would, life is a cycle, right? Nothing stays constant. When we were in the great depression in 2008, when the whole world was going through a great depression, we thought that there was no coming back from here, but we did come back.

We were stronger than ever before. And so is the case with the pandemic. Maybe it’ll not be an immediate change. Maybe things will not change immediately in a month or two.

Maybe the work will not pick up as quickly as we wanted to, but there will be the same old normal that was”. According to Sarita, she’s pretty confident that things will come back to old normal soon, and the human race has the ability to soar back like a phoenix to fight this situation and come back as stronger than ever.

When asked again about what she feels regarding when she can perform her first on ground event, she replied “I am hopeful that post diwali I’ll be able to do my first large scale of ground event.”

But before that time period, she has already got requests and enquiries for the month of June this year. According to her, many agencies are still waiting eagerly to host their on ground events as soon as possible.

But in terms of a worse case scenario, she feels that it’s going to be early parts of 2021, specifically early quarters when things would get back to normalcy.

Even if the vaccines are out, it would slowly take a few months to get back to the old normal. Until then there would be regulations especially in weddings, events and corporate events in terms of people attendance.

Being a senior MC yourself, would you like to give any piece of advice for the rest of your fraternity or even younger ones joining in?

I think that is very important. A lot of people don’t understand the kind of complexity that this industry has to deal with because on the exterior, it looks very glamorous.”

Sarita further gave advice on pursuing MCing as part of career during this pandemic. According to her “content is the queen” right now.

This is because, earlier a major part of the discussion before any events she went to host, was about her dressing. What dress she should wear mattered a lot, including in a positive sense as well.

But ever since the lockdown has started, she has done 7 shows and not a single question has arised about her outfit or what she would wear.

It’s all about what kind of content she has, or the various ideas that she has got etc.

Hence, she feels if young MCs right now could focus on their content and how to make it more innovative, creative and user engaging then this is the best time for the career to kickstart.

To catch the entire interview, please head over to our Instagram page.