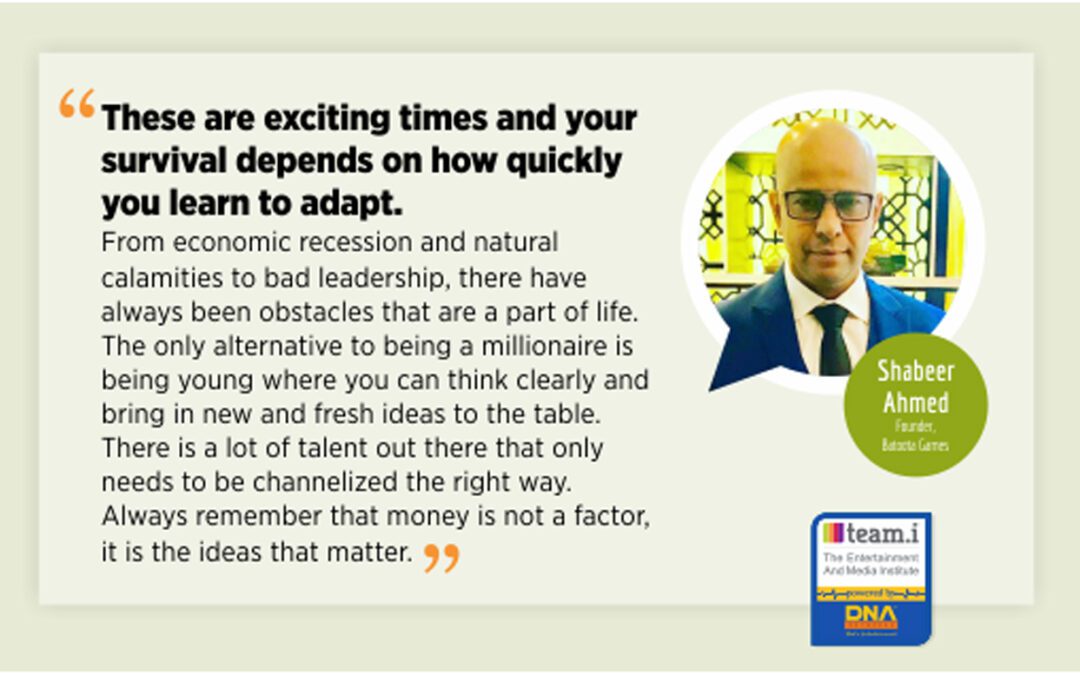 The man who took team building activities to the next level among other things in the space of event management and whom we at team.i were delighted to host on the 16th of August was none other than Shabeer Ahmed, an artist whose contemporary style and energetic approach towards his work has made him a well known personality in the industry.

With over 15 years of experience Shabeer is the founder of two very successful companies, ‘Vertis&Barrow’ and ‘Batoota Games’ and holds 2 patents on designs that he uses for team building. Over the course of 50 minutes we spoke in length about his role as a creative designer and his take on the current situation and its effects on the industry as a whole.

Getting to know our speaker
Shabeer began his journey as a speaker, influencer and artist very early on in his life when he took part in school debates before moving to Bangalore to pursue his Mechanical Engineering. He went on to join the ‘All India Radio’ where he was one of the first radio jockeys at the time mainly working with english music. Later exploring the avenues of VJing, MCing, hosting games at the country club and small shows across the city, Shabeer is today one of the biggest names in the industry.

His Journey and Learning
Shabeer shared with us his experience of starting Batoota Games, a project that he is incredibly passionate and proud of. From thinking outside the box to creating unique and exciting activities, he tells us about bringing in a fresh and thrilling approach to the space of team building activities today and the impact of good futuristic innovations thereby contributing towards growth and improved customer experiences.

We then went on to discuss the rise and ebb of the zorbing phase in India and what led to its gradual decline as a result of ineffective safety measures. While designing any activity or game, Shabeer is careful to ensure that there are no impact spots involved and is cautious of avoiding any potential injury to his clients.

Discussion on Patents
Shabeer is the proud owner of not one but two patents for his remarkable work on designing 2 models, one being that of a boat and the other of a bridge, both used for large set up activities. He  gives us an insight into working on the right approach in order to leave a long lasting impression. A design based progressive approach that is scalable is the better option when compared to an inventory based approach is what Shabeer has come to experience first hand.

Depending on the authenticity and uniqueness of the design, getting a patent is not all that difficult is what Shabeer has to say. While it initially bothered him when his designs were being replicated and pitched to clients by third party users, he eventually came to understand that while it can be copied and reused by others, it’s true and initial visualization lies only in the hands of its creator and this to him was all that mattered. By the end of the day, a client pays for the experience and it can be delivered to its fullest only by the person who has created it and so he advises the younger generation to not be afraid of putting their work out there and seize every opportunity to innovate and create.

How has his business been impacted by the pandemic?
The initial months after the pandemic began, Shabeer was left in a funk, having to shut down his operations altogether. Difficult decisions including laying off some of his staff had to be taken. He used the time he had to start writing a book, something he always wanted to do but never got around to actually doing.

A lot can be said about Shabeer for his goodness towards helping those in need and his belief in providing selflessly for the greater good. Wanting to provide opportunities to those who needed it the most, he began working on a series of virtual activities. Today, he has designed and created several incredible virtual products and is looking to introduce several others in the coming few months.

Having worked on a few virtual corporate projects, Shabeer has come to identify that in adversity lies great opportunity. Addressing the younger generation of event planners, he talks about the advantage they hold over the more established event planners who have a lot pulling them down at the moment. He goes on to mention that now is the right time to start a career in event management and given the talent, the right vision and the appropriate technology, there is nothing that cannot be achieved.

How bad was the financial fallout?
In terms of monetary compensation, Shabeer is aware of the drop in the finances but is quick to add that in terms of the work that is being done, there seems to not be much difference apart from the changes in magnitude. It is in celebrating uniqueness, innovation and creativity that keeps businesses going during uncertain times such as this. It is not the lack of money that is preventing large organisations from utilizing services but the need to generate value in what it is that they are investing in.

Parting thoughts
“These are exciting times and your survival depends on how quickly you learn to adapt. From economic recession and natural calamities to bad leadership, there have always been obstacles that are a part of life. The only alternative to being a millionaire is being young where you can think clearly and bring in new and fresh ideas to the table. Do not be put down by the situation as we are all on a level playing field at this point. Instead, focus on answering these questions – Who is my target market? What do they want? Find solutions and cater to them and find your niche. You need to ask the right questions in order to deliver the right solutions. There is a lot of talent out there that only needs to be channelized the right way. Always remember that money is not a factor, it is the ideas that matter.”